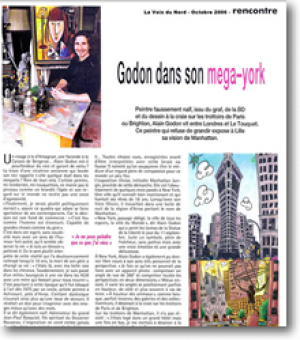 A faux naïve painter, with his roots in graf­fiti and comic strip art and chalk pave­ments draw­ings in Paris and Brighton, Alain Godon spends his time between Le Tou­quet and Lon­don. The artist, who refuses to grow old, is exhibit­ing his vision of Man­hat­tan in Lille. […]

Because deri­sion is his stock in trade: “It’s mad­den­ing how sur­pris­ing the man can be — capa­ble of great as well as bad”. He appears to observe life in this spirit, with­out a trace of caus­tic­ity but with a ter­rif­i­cally acer­bic sense of humour. […] He also describes him­self as naïve, an admirer of the great Jean-​Paul Basquiat, the spir­i­tual dis­ci­ple of Rousseau, Le Douanier. It’s clearly true that inspi­ra­tion does not emerge from a void, but the vision of life, as he por­trays it, is marked by a lan­guage that is uniquely his alone; a sense of dia­logue, an order of colours and an urgency that sig­nal a still nascent style. A style but also a method. […] All that he sees, reg­is­ters and then inter­prets has a (real or false) naivety, which, one rather sus­pects, takes a com­pas­sion­ate slant on this slightly crazy world.