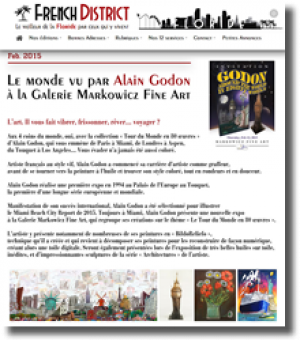 Art, does it give you a buzz, does it make you shiver, does it make you dream…. does it make you travel? From the four cor­ners of the world, yes, with Alain Godon’s col­lec­tion “Around the World in Eighty Works”, which takes you from Paris to Miami, from Lon­don to Aspen, from Le Tou­quet to Los Ange­les… Get­ting away has never been so colourful.

As tes­ta­ment to his inter­na­tional suc­cess, Alain Godon was cho­sen to illus­trate the Miami City Beach Report of 2015. Back again in Miami, Alain Godon is show­ing his new exhi­bi­tion at the Markow­icz Fine Art Gallery which regroups his works under the theme of ‘Around the World in Eighty Works”.