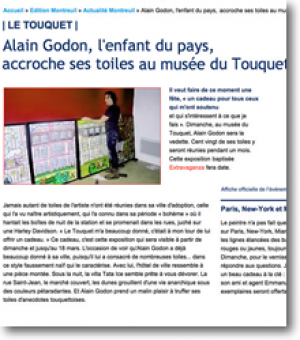 He wants to make this a cel­e­bra­tion, “a gift to all those who have sup­ported me and shown an inter­est in my work.” On Sun­day, Alain Godon will be cen­tre of attrac­tion at the Museum of Le Tou­quet. One hun­dred and twenty of his paint­ings are to be exhib­ited over a one month period. This exhi­bi­tion has been chris­tened Extrav­a­ganza and is not to be missed. It is the first time that so many of the artist’s paint­ings have been brought together in the town that he has adopted; a town that has seen him flour­ish as an artist and that he got to know dur­ing his “bohemian” period when he the resort’s night­clubs were one of his fre­quent haunts and he roamed the streets astride his Harley David­son. “Le Tou­quet has given me a lot and now it is my turn to give back.” His gift is an exhi­bi­tion which opens on Sun­day and runs until 18 March. An occa­sion to see that Alain Godon has already given much to his town, because so many of his paint­ings pay trib­ute to it — decep­tively naïve that is the char­ac­ter­is­tic of his style. Viewed through his eyes, the town hall looks like a wed­ding cake. By night, the Villa Tata Ice looks as though it is about to eat you up. The Rue Saint-​Jean, the cov­ered mar­ket, the dunes all teem with anar­chic life in their splut­ter­ing colours. Alain Godon loves to pep­per his paint­ings with anec­dotes of “tou­quet­tois” life.