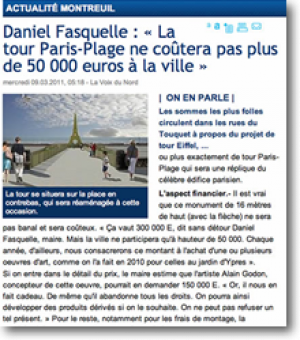 Daniel Fasquelle: The Paris-​Plage tower will not cost the town more than 50,000 Euros.

Daniel Fasquelle: « The Paris-​Plage tower will not cost the town more than 50,000 Euros.

Silly sums are being bandied around the streets of Le Tou­quet in the con­text of the Eif­fel tower, or to be pre­cise the Paris-​Plage tower, project which will be a replica of the famous Parisian con­struc­tion. […] “Legal, finan­cial and tech­ni­cal, all three fac­tors must have a green light before it can be launched” sums up Daniel Fasquelle. This is why this project, orig­i­nally envis­aged for this sum­mer, may not hap­pen until autumn. But be it in August or in Novem­ber, it will cer­tainly make Le Tou­quet a talk­ing point; which is the aim.”