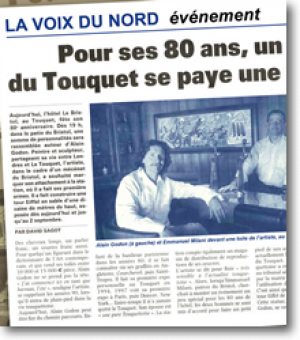 The Hotel Bris­tol is cel­e­brat­ing its 80th birth­day today. From 7pm on the patio of the Bris­tol Hotel, a host of per­son­al­i­ties will crowd around Alain Godon. The artist, painter and sculp­tor who divides his time between Lon­don and Le Tou­quet, is a spon­sor of the hotel and wanted to mark his attach­ment to the resort where he started his career. He has had an Eif­fel Tower con­structed out of sand, which is over ten meters high and which is on dis­play from today until 2 September.