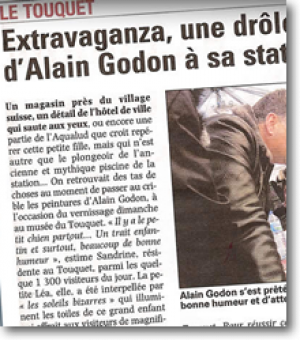 Extrav­a­ganza, quite a ded­i­ca­tion from Alain Godon to his beloved Le Touquet

Extrav­a­ganza, quite a ded­i­ca­tion from Alain Godon to his beloved Le Touquet

H […] “e’s a child who hasn’t grown up”, says Sophie Deshayes, direc­tor of the museum. “He has a hugely appeal­ing naïve side to him which reaches out to every age group. He really is a liv­ing artist with his unique style. He doesn’t belong to the move­ment of con­cep­tual artists that cur­rently holds sway.” In short, Le Tou­quet is delighted to have an artist, an ambas­sador regard­less of his image and with a rep­u­ta­tion that exceeds by far that of the resort. On Sun­day, the free books that he was sign­ing were snatched away and often after more than a good two hours’ wait. There were even Parisians who come from the cap­i­tal just for the event. Did you say Extravaganza?