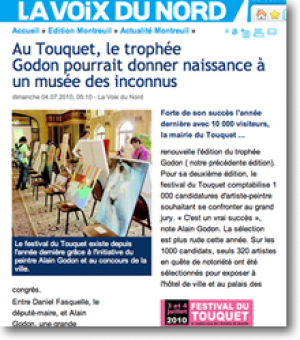 Empow­ered by the suc­cess of 10,000 vis­i­tors last year, the town coun­cil of Le Tou­quet has re-​initiated the Godon Tro­phy (our pre­vi­ous edi­tion). In its sec­ond year, the Fes­ti­val of Le Tou­quet has 1,000 appli­ca­tions from artists seek­ing to com­pete in front of a grand panel of judges. “It’s a real suc­cess” declares Alain Godon. The selec­tion process is more robust this year. Of the 1,000 appli­cants, only 320 of those seek­ing fame have been selected to exhibit at the Town Hall and the Palais des Con­grès. A great under­stand­ing appears to have been forged since the first fes­ti­val between the Deputy and Mayor, Daniel Fasquelle, and Alain Godon. “There are few artists like Alain invest­ing as much in terms of both time and money to help young artists” notes the Mayor of Le Touquet.