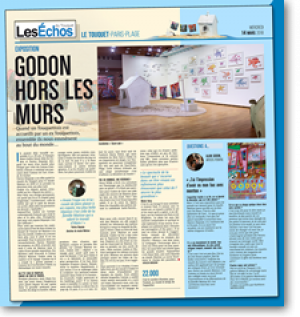 hen an ex-​Touquettois wel­comes a Tou­quet­tois, together they are then going to take us to the ends of the world.

They had worked together 18 years ago. At that time Alain Godon was already “doing” Godon and Patrice Deparpe was the direc­tor of a museum a lit­tle more mod­est than that of Le Cateau-​Cambrésis. Through their love of art, both of them have pur­sued their own paths; they have grown, they have evolved.

As a point of fact, Patrice Deparpe left the museum in Le Tou­quet in 2010 for the Matisse Museum, tak­ing over as direc­tor three years later.

Mean­while Godon has never returned to paint­ing his “Fig­ures of the Cen­tury”, replac­ing it with his endur­ing heady pas­sion — New York, his inspi­ra­tion for a long time now. Archi­tec­ture, from which his love of draw­ing orig­i­nates, has enabled him to become a “bank­able” product.

Today Godon is The French Con­tem­po­rary Artist who sells the most and at the high­est prices. How­ever, that’s not enough for his friend Patrice Deparpe!

For some­one who crosses con­ti­nents with the aim of explod­ing the beauty of Matisse’s works for the whole world to see, Godon is still keep­ing back a lot in reserve. Of that he is con­vinced. In 2015, and to stretch him even fur­ther, Patrice Deparpe sug­gested that he put his name next to that of Matisse in the form of a big exhi­bi­tion. Like Henri Matisse, Godon adores colour and travel. Like him, he sketched the “Big Apple”. Like him, he would soon go to Tahiti. The theme was already in place.

So, Alain Godon, who 10 years pre­vi­ously had cho­sen Eng­land as his home, left behind the sur­round­ing grey­ness for a few months so that he could hold out his hands and touch the light. Blue, orange, green, yel­low, vio­let, pink: what­ever, it’s every­where, bril­liant at any time of day and night. And then there’s the flora and, even more so, the fauna. These fly­ing fish and giant tur­tles that he could go and watch every day. Nev­er­the­less, Godon did but few sketches and took only pho­tographs whilst he was there. Because, like Matisse, Godon had to “digest” this jour­ney in order to under­stand in which direc­tion to take it. There are no build­ings, no struc­tures in Tahiti to give per­spec­tive, so he has had to resort to other things. These have come in a more sub­stan­tial form. Soon after his return, he plunged into his sculpt­ing — fly­ing fish born of stain­less steel and bronze… squir­rels, the Amer­i­can eagle and build­ings too! He also started to work with card­board. Wood, as well, to cre­ate this crazy pop-​up scene. And then there’s the taxi, another fly­ing one, straight from the world of Harry Pot­ter, tak­ing us from New York to Tahiti at a click of the fin­gers – of course ‚the Tou­quet­tois see a touch of the Paris-​Plage Tower there. In point of fact, this taxi washed up on a beach in par­adise is his dona­tion to the museum!

Not homage but veneration!

Oscar Wilde wrote “imi­ta­tion is the sin­cer­est form of flat­tery that medi­oc­rity can pay to great­ness”. It was never in ques­tion that Godon would pro­duce but a pale imi­ta­tion in def­er­ence to Matisse’s work. Not at all, his ref­er­ences to him are much more sub­tle; he reads him between the lines. Take the cha­sub­les of the priests stand­ing in front of St Patrick’s cathe­dral … but, you need to know before­hand that Matisse actu­ally cre­ated the vest­ments for the priests when he designed the Rosary Chapel in Vence. The same goes for his series of eight deckchairs — Matisse drew deckchairs, so Godon had some made by the Tapes­try Royale of Aubus­son. There is yet another ref­er­ence to Matisse when he worked as a weaver and Godon paints onto silk squares… But more than any­thing, Godon and Matisse share the play­ground together — Matisse can be found in nearly all of Godon’s can­vases and if he isn’t there, then there is a ref­er­ence to him!

In order to achieve this result, Godon has worked on the exhi­bi­tion for three years, and the team at the museum for two months. Three years dur­ing which the artist has put aside any mon­e­tary con­sid­er­a­tions and has spilled his guts out. Worry not; his work is still instantly acces­si­ble; Godon speaks from the heart with no other agenda than to spread a lit­tle bit of hap­pi­ness. The exhi­bi­tion reads like a car­toon comic strip, but some of the cap­tions sparkle more than oth­ers with­out you noticing.

“The spec­ta­cle of beauty incar­nated in a liv­ing being is infi­nitely more mov­ing than that of the most grandiose work.” Michel Henry

This is indeed the case when he takes us to Cen­tral Park. He is recon­nect­ing with street art, with his work both on pave­ments and on walls, as when he first started out on the pave­ments of Paris and of Brighton… The rain often helped him to under­stand the ephemeral nature of art. This is put very nicely in “Dreams are the Pre­rog­a­tive of the Poor”. Here he puts him­self on stage in front of the Guggen­heim try­ing to make a few bucks by sell­ing his paint­ings, “Nanou”, his soul mate, his part­ner, is urg­ing him to live the dream, because per­haps he too one day will have an exhi­bi­tion in a major museum. And today that has hap­pened — carte blanche from the Matisse Museum, which is clearly going to open up the field of pos­si­bil­i­ties for the future….

“Before the exhi­bi­tion, I was accused of cur­ry­ing favour with a friend, my per­fect riposte is that Matisse’s fam­ily have loved Alain’s work” — Patrice Deparpe, Direc­tor of the Matisse Museum

Ini­tially sched­uled to run from 14 Octo­ber to 4 March, the exhi­bi­tion has been so suc­cess­ful that the museum has man­aged to extend it for 14 more days. With over 22,000 vis­i­tors to date, Patrice Deparpe’s bet has paid off: to attract an audi­ence that wouldn’t nor­mally cross the museum’s thresh­old. Godon has com­pletely anni­hi­lated that! 8 paint­ings, 49 draw­ings, 10 sculp­tures, 96 Bil­doRe­liefos and 5 instal­la­tions later, every­one leaves with a sense of sat­is­fac­tion of an amaz­ing jour­ney… For once Par­adise has become a real­ity, you can almost touch it! “The Archi­tec­ture of Dreams” has suc­ceeded in seduc­ing the most well-​informed of con­nois­seurs and art col­lec­tors, as well as Mr and Mrs Joe Bloggs and fam­ily. Play­ful, mov­ing, elec­tri­fy­ing, the exhi­bi­tion can be seen until 18 March.

“It feels as though I’ve grad­u­ated with honours”

The exhi­bi­tion is nearly over and will soon be dis­sem­bled, what’s going to hap­pen to it?
Noth­ing, it’s an exhi­bi­tion that is purpose-​made for the Matisse museum and it con­nects entirely to that place and that place alone. That’s the ephemeral side of art… What I can how­ever say is that I have loved work­ing with Patrice Deparpe again; he was totally in tune with me, he knew when to refo­cus me and we are very much on the same wavelength.

There has been an enor­mous num­ber of vis­i­tors, each and every one ecsta­tic, even the crit­ics, how have you taken this?
It’s hon­estly quite crazy. I have had some really good write-​ups, met some won­der­ful peo­ple, the Deputy Direc­tor of the Lou­vre Museum has trav­elled here and I’ve even been praised by a body of crit­ics, I can’t believe it. To exhibit at the Matisse museum is like get­ting my school cer­tifi­cate, but to have won the approval and the con­grat­u­la­tions of Matisse’s fam­ily, then that’s really grad­u­at­ing with honours!

Is this going to change any­thing in your career?
It’s too early to say, but this inevitably puts my work under the spot­light. I’m one of those artists who have come out unscathed thanks to the inter­net. I’m not a fash­ion­able artist; I’ve steered my own course and no more. In any case, I’ve no wish to change; I don’t want peo­ple to stand in front of my works for hours on end ask­ing them­selves what hid­den mes­sages lie there. I use a code that every­one under­stands. I trade in colour, muse­ums are like sweet shops and I just want to carry on mak­ing peo­ple happy.

Are you plan­ning any other exhi­bi­tions?
Yes, in April in Le Tou­quet at the Milani Gallery (the open­ing night is on 14 ed.) and on 7th and 8th Decem­ber at the Markow­icz Fine Art Gallery in Miami. I will be back with new surprises!