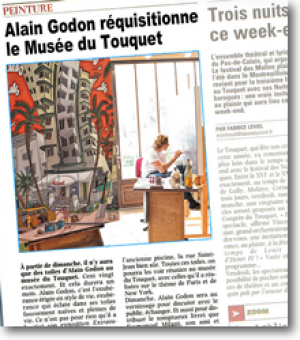 Alain Godon takes over the Museum of Le Touquet

Alain Godon takes over the Museum of Le Touquet

From Sun­day onwards, the museum of Le Tou­quet will only be show­ing Alain Godon’s paint­ings. One hun­dred and twenty to be pre­cise. And they will be there for a month. Alain Godon is the embod­i­ment of exu­ber­ance as a life style; an exu­ber­ance that bursts forth from his decep­tively naïve paint­ings which are so full of life. It is not with­out rea­son that he has called his exhi­bi­tion Extra­vangza. And what’s more, Alain Godon is a Tou­quet­tois, who avows an extra­or­di­nary attach­ment to his town; the town which wit­nessed his début and where he lives, when he is not in his stu­dio in Eng­land or at an exhi­bi­tion in Miami, or else­where. He has painted Le Tou­quet from every aspect: the town hall, the air­port, the div­ing board and the old swim­ming pool and, of course, the rue Saint Jean. We can see all of these paint­ings re-​assembled at the museum of Le Tou­quet and exhib­ited along­side more of his paint­ings of Paris and New York.