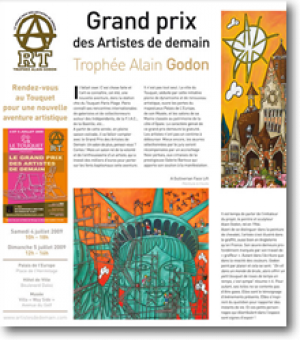 It was risky. But it’s done and now this sum­mer the art world is to wit­ness a new ven­ture in the chic resort of Le Tou­quet Paris-​Plage. […] Far from rest­ing on his lau­rels after inter­na­tional suc­cess — his next exhi­bi­tion is planned for Dubai — Godon, with his years of hard­ship still in the back of his mind, has deter­mined to open doors for fel­low artists by launch­ing this Grand Prix des Artistes de Demain (Grand Prix for the Artists of Tomor­row), which is totally free for exhibitors and vis­i­tors alike. There has been more than 750 appli­cants with over 300 selected to exhibit one paint­ing of their choice.