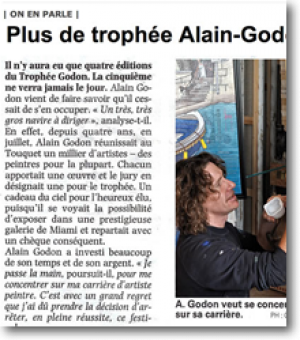 The Alain Godon Tro­phy is no more

T here have only been four Alain Godon Tro­phy events and the fifth is not going to hap­pen. Alain Godon has just announced that he is step­ping down. “A very, very large ves­sel to steer” he muses. Every July over the last four years Alain Godon has brought together a thou­sand artists – most of them painters. Each one has brought along one work of art and the jury has selected one of their num­ber to take the tro­phy. A gift from the gods for the lucky win­ner; because it offered the oppor­tu­nity to exhibit in a pres­ti­gious gallery in Miami and awarded a prize cheque.

Alain Godon has invested in terms of his time and of his money. “I am hand­ing over”, he con­tin­ued, “to focus on my career as an artist and a painter. It is with great regret that I have had to make the deci­sion to step down in the full flow of this hugely suc­cess­ful fes­ti­val.”
If he is hand­ing over, there is no wait­ing in the wings. The town doesn’t want to take on the fes­ti­val. “We can’t do Godon with­out Godon”, explained Daniel Fasquelle. “He is the only one with the know-​how, with the con­tacts, the only one able to bring one thou­sand artists together. There has been no quar­rel. This fes­ti­val has taken up a lot of his time and his energy. Alain Godon is now step­ping back, but that doesn’t mean he isn’t going to stage the occa­sional event from time to time.”