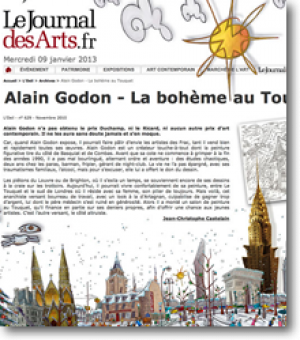 So what if he’s never won the Duchamp prize, the Ricard prize or any other con­tem­po­rary art prize? He prob­a­bly never will, but that doesn’t mat­ter to him. Why? Because when­ever Alain Godon exhibits, his paint­ings sell so well and so quickly ina way that would make any of the big art school grad­u­ates quite pale with envy. Alain Godon is a cre­ative artist who dab­bles in every­thing and whose fig­u­ra­tive art draws on the influ­ences of Basquiat and Com­bas. Before his prices started to climb at the end of the 1990s, he had drifted through life, oscil­lat­ing between order and adven­ture: a chaotic school­ing, two years in the para­chute reg­i­ment, bar­man, second-​hand clothes sales­man, night club man­ager. Life had not been kind to him with fam­ily trauma and alco­hol, but to make it up to him, it had given him a gift: to be able to draw.

Those who vis­ited the Lou­vre or walked the streets of Brighton, to where he fled for a time, still remem­ber his chalk pave­ment. Today he earns a com­fort­able liv­ing from his art, spend­ing time in Le Tou­quet and the south of Lon­don, where he lives with his wife, an endur­ing pil­lar of sup­port to him. But the thing is this anar­chist, with a worka­holic side to him and an air of d’Artagnan about him, feels guilty that he earns too much money – he, whose father, a doc­tor, ruined his life by his gen­eros­ity. And so, he set up an art fes­ti­val in Le Tou­quet, par­tially funded out of his own pocket, in order to give young artists an oppor­tu­nity. This is his other side, the altru­is­tic side.